I Realised It Doesn’t Even Matter 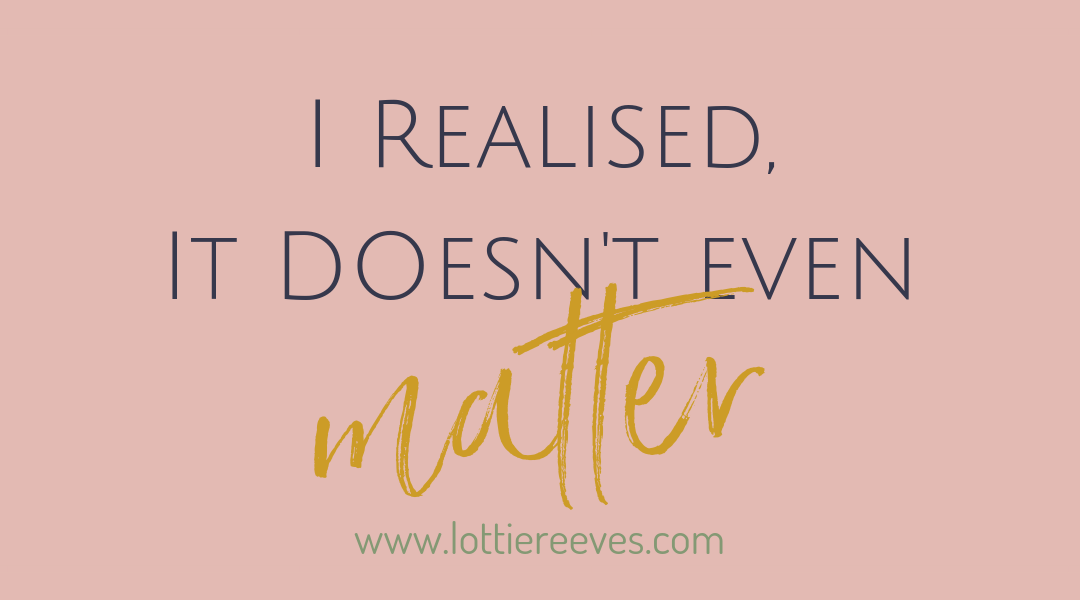 Once upon a time, 5 years ago to be more precise, a friend said to me “I think you’d make a great coach” Oh that would be right up my street I thought, but I’m a Primary School teacher who is just about to embark on her dream job managing volunteer projects in South Africa. “Hmm, that does sound interesting but I don’t think I could do that” is what I actually said. And we carried on drinking wine (Hi Sheena!)

Off I went to South Africa where I managed volunteer projects before dealing with the curveballs life handed out, I set out to become location independent working from a caravan while exploring the perimeter of the country.

In order to become location independent, a goal that only occurred to me after deciding to pack everything, including 2 dogs, into a caravan, I taught myself web development. On a whim, I picked something I enjoyed, that I thought would be fun and that enabled me to achieve that one goal. I listened to my intuition.

Over the next few years, I went on a love-hate journey with being a web developer. Something that started out as a means to an end became so entwined with whether I felt like I was enough, good enough, doing well enough, earning enough, successful enough. What started out as something I just decided I wanted to do in the here and now, became all-consuming.

The little seed that was well and truly planted in my brain after that offhand conversation several years ago is something I have come back to and considered, time and time again over the last few years. However, I have always been doing something else; managing volunteer projects, being an expat, becoming location independent, becoming a web developer, running a social enterprise, travelling the perimeter of South Africa, building a boat. You know, busy navigating a less traditional path.

There’s always seemed to be a reason not to do the one thing I really want to do.

Spoiler alert: those reasons are actually a story I have been telling myself. A story in which the people around me would be disappointed if I decided to do something other than what I told them I do. A story in which everyone around me has just another reason to say “oh hell, what’s she up to now?” “last week she told us she was a teacher/project manager/web developer, what on earth does she think she’s doing now?”

Because we all know I have gone through a whole heap of ‘things’ on this adventure through life.

I put a lot of blood, sweat and tears into becoming a freelance website developer. You know a real freelancer, as opposed to someone who just develops websites from a caravan as a means to an end. I was determined to be successful and for it to not be just another ‘thing’ I was trying.

I have written before about how I spent a lot of 2018 pushing myself to be better and to stay committed to something I had decided to throw myself into on a whim because it met the need I had at the time. I felt that I couldn’t change my mind, I had to be successful at what I was doing here and now before I could even contemplate listening to my intuition again. I spent a lot of time affirming, envisaging, manifesting and ultimately realising it’s all just bullshit. I can do whatever it is that I want to do when I want to do it. I ignored the bullshit and set my own goals. One of which was to be fully booked with clients I love working with, who have come to me through word of mouth.

You know what? In December that happened. Not because I manifested the clients, the money or the recommendations. It happened because I worked on my business, built a reputation and put myself out there. Now I am booked until March with web development clients. Projects I am excited to work on. But you know what else? I set a goal. I achieved it. I proved to myself I could do it.

And in the process, I realised that doesn’t even matter. Yes, it’s great to set goals. It’s awesome to have something to work towards. But, when those goals stop you from doing what you want to do, from deviating or from following your own adventure regardless of what anyone else thinks, they aren’t goals. They are hindrances.

Your entire life journey ultimately consists of the steps you are taking at this very moment.

In reality, and correct me if I am wrong, no one really gives a toss about what I am doing. In fact, the fact I can stay in bed until whatever time I want and work from wherever I want probably pisses them off far more than me being a coach rather than a web developer, will. No matter what I am doing, I still show up for the people I care about. I show up for my clients and provide what they need me to provide. I support and hold space for them to follow and achieve their passions and goals intuitively and playfully.

That wise woman I have mentioned before, recently asked me when it would be ok to ‘pivot’. So, I had a little think, drank a little wine, did a little reflecting (it is January after all) and realised it’s ok now. I’m ok deciding I want to do that thing. That thing that I do without thinking, that I love to do and that I already do.

Because that’s the point. We get to choose. We get to do the things that light us up, that are playful and adventurous. We get to choose our dreams, set our goals and meet them/change them/ignore them as we wish. We are allowed to live life to the beat of our own drum. We are meant to follow the ideas we have when we have them.

So now? Now I choose to call myself a coach. I choose to work with people in a way that lights me and in a way that I can’t help myself from doing. I choose to think about new goals and to work towards them for now. Who knows? Tomorrow, next week, next month, those might be different. And that’s ok.

If you have a big dream that you’re excited to bring to reality in 2019, I would love to chat about how we can work together 😀

It’s been 3 years since I last saw this beautifu

Chocolate fondue on a Monday afternoon? Oh go on t

Life on board Hamba Kahle is going to get a little

Error: API requests are being delayed for this account. New posts will not be retrieved.

We use cookies to ensure that we give you the best experience on our website. If you continue to use this site we will assume that you are happy with it.OkNoPrivacy policy
Revoke cookies